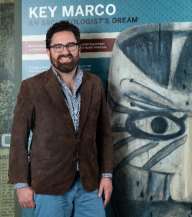 SUBJECT: In December 2018, Marco Island welcomed “home” some of Florida’s most well-known archaeological artifacts for a special exhibition at the Marco Island Historical Museum. Excavated in 1896 from Key Marco – an archaeological site less than three miles from the museum – the artifacts are some of the most important precontact Native American objects ever discovered in North America. Now housed in the collections of such venerated institutions as the Smithsonian Institution’s National Museum of Natural History, the University of Pennsylvania Museum of Archaeology and Anthropology, and the Florida Museum of Natural History, the fragile and irreplaceable items offer unparalleled insight into Southwest Florida’s early Native peoples. Austin Bell, Curator of Collections for the Marco Island Historical Society, will discuss what it took to bring these objects back to their place of origin, where they will be on display as part of an award-winning free exhibition until April 2021.

Austin Bell, Curator of Collections at the Marco Island Historical Society since 2013, is a museum professional with degrees in Anthropology (B.A.), Classical Studies (B.A.), and Museum Studies (M.A.) from the University of Florida. Austin’s exhibitions at the Marco Island Historical Museum have been recognized for excellence by the Florida Association of Museums and the Southeastern Museums Conference. He was named the 2017 “Artist of the Year” by the Marco Island Foundation for the Arts and the 2018 “Marco Island Citizen of the Year” by the Naples Daily News. Austin also serves on the Collier County Historic Archaeological Preservation Board and, in 2019, received an appointment as a Consulting Scholar at the University of Pennsylvania Museum of Archaeology and Anthropology. A native Floridian, Austin has been an active member of Florida’s museum community for more than a decade.