Tom Franchino is an attorney in private practice in Naples, Florida.  He joined SWFAS in 1996 and came to SWFAS during some of the chapter’s most active years in field excavations.  The Society stayed busy with salvage archaeological digs and surveys, lab work, and monthly meetings.  Tom was a member who you could always count on.  He served 16 years in leadership roles in SWFAS: 7 years as a Trustee, 7 years as 1st Vice President, and 2 years as President.  As a well-known and respected attorney, Tom brought a high level of professionalism to the positions he held.  His legal expertise was instrumental in SWFAS being granted tax exempt 501(c)3 status and in helping to rewrite the bylaws.  He was always eager to participate in an excavation, bringing his children to assist.  Every organization would be fortunate to have Tom Franchino.  We wish to recognize his years of service, his contributions, and our appreciation of his participation and friendship.

Steve joined SWFAS in 1990. He became involved as Trustee for 4 years, 2nd Vice President, 1st Vice President, and President for two years each. Steve participated in many SWFAS activities, ranging from garage sales to organizing group trips to Useppa Island, Captiva Island, and the Ah-Tha-Thi-Ki Seminole Museum. He was a contributor to the SWFAS Newsletter and wrote a monthly article titled “Who’s Who in Archaeology” about pioneers in archaeology. He produced another series of articles titled “Dig This” about how many things we take for granted are somehow connected to archaeology.
Steve spent 17 years with Boston Scientific as a biochemical engineer and moved to Florida where he could concentrate on his love of nature and biology. He has given his time to many causes and organizations. When in Massachusetts, he was a Trustee for Old Sturbridge Village, a historical museum of older buildings, farm implements, and machinery with costume actors portraying daily life. In Florida, Steve worked as a biologist for Fred C. Babcock, owner and developer of Babcock Ranch, helping to develop the environmental plan and legacy that Babcock envisioned. Steve also directed tours for the Ranch, stressing its strict environmental standards. Steve helped form the local Florida Society for Ethical Tourism and received the Junonia Award from the Lee County Tourist Development Council. As a biologist, he spent three years as Director of the Calusa Nature Center in Ft. Myers, was active in the Audubon Society of Southwest Florida, the Florida Native Plant Society, and was a member of the advisory board for the Randell Research Center at Pineland. We wish to recognize Steve’s dedication to the environment and archaeology of southwest Florida. 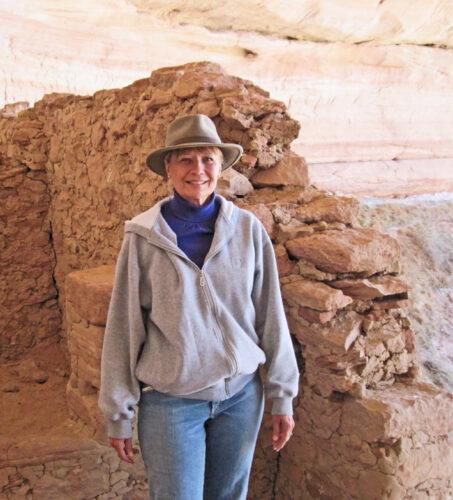 Susan first worked as a “Lab Rat” at the SWFAS Craighead Archaeological Laboratory at the Collier County Museum in Naples, Florida. She quickly distinguished herself with  computer skills and organizational abilities. In 2016, Susan became SWFAS Secretary at a crucial time when our chapter was creating a website. Susan was instrumental in loading old SWFAS Newsletters to the “cloud.” The 40 years of old newsletters became the foundation of our website and historical information.

She worked to upgrade our on-line mailing system, enabling us to develop a 300-plus mailing list to advertise our presentations. SWFAS also advertises our programs in local newspapers using free advertising as a non-profit, and Susan targets the newspaper advance notification deadlines for prime locations. Susan also formats the SWFAS Newsletter. She has an “eye” for layout and details, always making a pleasing product.  In 2017, Susan was presented a SWFAS Golden Trowel Award. 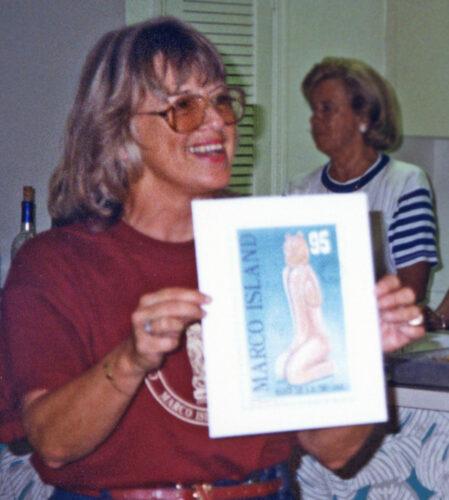 Perdichizzi joined SWFAS in 1993 and has served as 2nd Vice President for two years, 1st Vice president one year, President for two years, and as a Trustee for seven years. In 1995, Betsy spearheaded the loan of the “Key Marco Cat” to celebrate the 100th anniversary of the 1896 Cushing excavation and, again, in 1999 to celebrate the millennium. Betsy has served many years on the Collier County Historic Archaeological Preservation Board, and she has participated in several SWFAS salvage excavations. 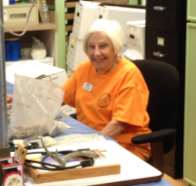 On Saturday May 12, 2018 Janet Gooding was awarded a 2018 Florida Anthropological Society Certificate of Achievement at the 70th Annual FAS meeting at St. Petersburg, Florida. Janet is a long time SWFAS member and deserves this recognition. Congratulations Janet!

Janet was unable to personally attend the meeting and the award was presented by FAS President Jason Wenzel and reads as follows:
The Southwest Florida Archaeological Society (SWFAS) nominates Janet Gooding for a Florida Anthropological Society (FAS) Certificate of Achievement for her 23 years of service to SWFAS. Since joining SWFAS in 1994, Jan has been a tireless worker, volunteering both in the field at excavations and at the SWFAS-staffed and supported Craighead Archaeology Laboratory at the Collier County Museum in Naples. She has educated, excavated, screened, cleaned, and catalogued! Jan has assisted in field excavations and laboratory analysis of a number of archaeological sites including Estero Island in Lee County, Horse Creek Camp, Old Marco Inn, Buschelmen, Heineken Hammock, Margood and Goodland in Collier County, and Mt. Elizabeth in Martin County.

A self-proclaimed “lab rat”, Jan works weekly at the Craighead Lab in season and has generously donated funds for upgrading computer equipment and lab furnishings as well as supporting radiocarbon dating at the Horse Creek Camp site. Jan participates in SWFAS fundraisers and has represented SWFAS at the Collier County Museum’s annual Old Florida Days. Jan’s fun, positive personality is a benefit to the field and lab environment, and her ideas and contributions have greatly enhanced SWFAS’ ability to meet its goals of increasing archaeological knowledge in the Southwest Florida area.

On Sunday May 13th SWFAS President John Furey personally called and informed Janet of her FAS Award. An award ceremony at the Craighead Archaeological Laboratory will be held this Fall to personally award it to Janet. 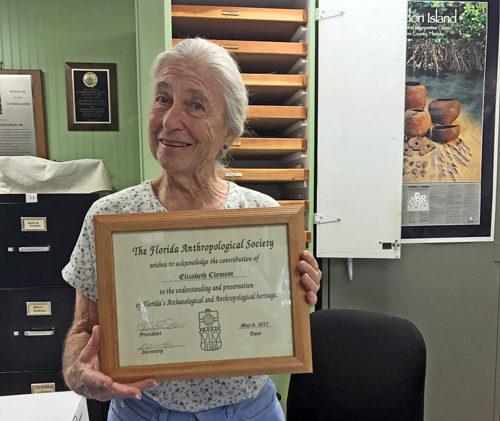 Elizabeth Clement was recognized and received the Florida Anthropological Society (FAS) Certificate of Achievement for her years of service both excavating in the field and her service at the SWFAS Dr. Frank C. Craighead Archaeology Laboratory at the Collier County Museum in Naples, Florida. Liz joined SWFAS in 2002. Prior to relocating to Naples, Florida, Liz worked in Montana and also Mozambique at paleontology excavations on dinosaurs. Since there wasn’t a paleontological group in Naples, she joined SWFAS. In her fifteen years of service with SWFAS, Liz has enthusiastically participated in a number of field excavations such as: The Mound House (8LL004), Mt. Elizabeth Site (8MT30), Pine Island Mound 5, Horse Creek Camp Site (8CR223), Old Marco Inn Site (8CR048), Buschelmen Site (8CR726), and Margood and Goodland Sites (8CR045). Not only did Liz help excavate these sites but she helped process the excavated materials in the lab as one of the Craighead “Lab Rats”. She has served on the SWFAS Field Committee, Archaeology Field Day and many years on the Laboratory Committee. Liz has generously volunteered her time by annually staffing the Craighead Archaeological Laboratory during the Old Florida Days sponsored by the Collier County Museum.

Liz has been very active in SWFAS by serving as a Trustee for several terms and as Second Vice President. She also continues to serve as an interface to the Collier County Museum by providing them volunteer information and reporting issues and concerns regarding the Lab. She recently has served as the “glue” for the Craighead Lab Rats to keep the Lab functions and efforts moving forward in a positive manner by calling/emailing members involved and assisting others in understanding the processes involved in completing projects, while actively participating herself. Her contributions and ideas have helped develop SWFAS positively.

Jack Harvey was recognized and received the Florida Anthropological Society (FAS) Certificate of Achievement awarded posthumously for his many contributions to Florida archaeology and to SWFAS. Jack was a microwave engineer and then a software developer for Wall Street applications. He retired and moved to Naples, FL around 2003, where he discovered the Southwest Florida Archaeological Society (SWFAS). Jack's favorite hobby was the study of geology and felt that archaeology was the "closest thing" to geology he could find in the Naples area.

Mr. Harvey was a SWFAS member since 2003 but he soon became a fixture at the SWFAS sponsored and staffed Craighead Archaeological Laboratory at the Naples County Museum and became one of the "Lab Rats".  At that time, the Lab Rats, who were SWFAS volunteers in the Craighead Lab, were processing material from many sites and it was a very busy time in the lab’s history. Jack found his areas of expertise, computing and systems organization and procedures, to be very useful to the Craighead Lab and Lab Rats. His background in computers enabled the lab to computerize and become up to date. Ever the engineer, Jack organized systems, developed procedures, standardized forms and computer systems for the Craighead Archaeological Laboratory and worked tirelessly on inputting and organizing data from materials excavated at various sites, as well as photographing artifacts both at the sites and in the Craighead Lab. In 2003 he supported the Old Marco Inn site (8CR048) laboratory materials that had been excavated in January 1983 but never analyzed. In 2004 Mr. Harvey continued to become more active in SWFAS and, working under direction of Art Lee with the other lab rats, he continued his support of the Horse Creek Campsite (8CR223) data, and contributed to the final report of this excavation through data analysis and typesetting the report itself. In 2005 Jack worked on the Strader site (8LL709) laboratory materials, as well. In 2008 Jack also supported the excavation efforts at Marco Island on the new sewer system and provided a summary report with photos on November, 2008. Throughout this time, Jack found that he enjoyed working in the SWFAS supported Craighead Archaeological Laboratory at the Naples County Museum.

Jack also was involved with the SWFAS Newsletter and created a series of 31 original articles entitled Geology Rules between June 2005 and December 2008. These were published in the SWFAS Newsletter and proved to be Jack's way of explaining geology and its relationship to archaeology with his humorous approach in his explanations and, especially, the titles he created. In April, 2009 he developed a new series of original articles entitled Digital Archaeology and published 16 of these in the newsletter through October, 2011. These had a definite archaeological theme, and again, he was able to insert his great sense of humor into them. He funneled his energy and creativity into his work at the Craighead Archaeological Laboratory and made SWFAS a better organization. Jack had been struggling with cancer for some time and eventually was unable to continue working at the lab and moved back North with his family where he lost his struggle in October 2016. He is missed very much by his fellow Lab Rats and everyone in SWFAS. His originality, creativity and wit will not be forgotten.