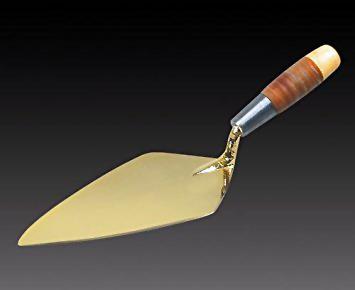 The SWFAS Golden Trowel Award was started in the early 1980’s by Art Lee and John Beriault to award outstanding work and dedication to SWFAS. The award is awarded by the president of SWFAS at his/her discretion to a deserving individual and is to be awarded at a SWFAS meeting. The award itself, consists of an archaeological trowel, spray painted gold and has a small plaque with the following: SWFAS GOLDEN TROWEL AWARD, THE NAME OF THE RECIPIENT AND THE YEAR.

JOHN BERIAULT received the Golden Trowel Award in February, 2019 at his home. The award was presented by John Furey, SWFAS President, and Charlie Strader, SWFAS Treasurer. John was a founder of SWFAS and he and Art Lee created this award in 1984 for the SWFAS President to recognize members that had made outstanding contributions to SWFAS and SW Florida archaeology. He was originally awarded the Golden Trowel Award in 1986. John has made many serious contributions to our organization over the years; serving as president for 11 years, 10 years as editor of the newsletter, made at least 26 presentations at the monthly meetings and recorded over 100 sites in SW Florida. He served as president of FAS for one year and received the Ripley P. Bullen Award for his work with avocational archaeologists. John was a tireless field excavator and, with SWFAS and the Archaeology Historical Conservancy, he excavated many sites and published the results. Congratulations and thank you.

DR. WILLIAM LOCASCIO was awarded a Golden Trowel in April, 2019 at his SWFAS presentation at the Collier County Museum in Naples, Florida. Bill is a SWFAS member and has been on our Board of Directors for several years. He is an Assistant Professor of Anthropology at FGCU since 2010 and has been excavating a tree island in the everglades near Belle Glade. He has shown that the everglades was inhabited for thousands of years in the Archaic Period and was not a sterile, uninhabited area as many have postulated. His work there is changing how we view the prehistoric populations and their subsistence base. He views his research as a way to teach the next generation of archeologists and advance archaeological knowledge of this region. Bill has placed much of his excavated material from this site in the SWFAS Craighead Archaeological Laboratory at the Collier County Museum for additional processing. Congratulations Bill!