April 17, 2019: Middens in the Muck: Evidence of Late Archaic Tree Island Communities in the Northern Everglades 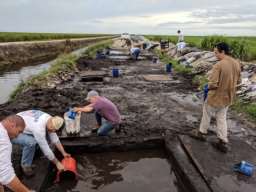 SUBJECT: Students from the Florida Gulf Coast University Anthropology Program excavated remains of a Late Archaic village near Belle Glade, FL over two seasons, producing evidence that communities of people thrived in the northern Everglades more than three thousand years ago. The evidence also indicates that the deposition of refuse from day-to-day life in these communities probably contributed to the growth and stabilization of tree islands, a unique and important topographic feature of the Everglades. This evidence extends patterns observed in Late Archaic sites on existing tree islands in the southern Everglades (Ardren et al. 2016; Bernhardtt 2011; Graf et al. 2008; Schwadron 2010), and contributes a rare and important archaeological case from the Everglades Agricultural Area.

Bill earned a Ph.D. in 2010 at the University of Pittsburgh after completing a dissertation that investigated how leaders of small pre-Columbian societies of Panamá first established formal power and authority over their neighbors and kin. While most of his work is now devoted to teaching students and training the next generation of excavators, Bill remains interested and active in research aimed at addressing questions concerning how and why formal hierarchies first emerged in human societies.